China engaged in Bio Warfare against the USA.  The people who authorized PPP money to companies that dealt with China or really any other country were therefore engaging in seditious and may include TREASONOUS activity.  Providing material support to an enemy during a time of war is treason.  Providing material support with public money to other countries can be considered money laundering.  That may be considered sedition outside an authorized declaration of war. 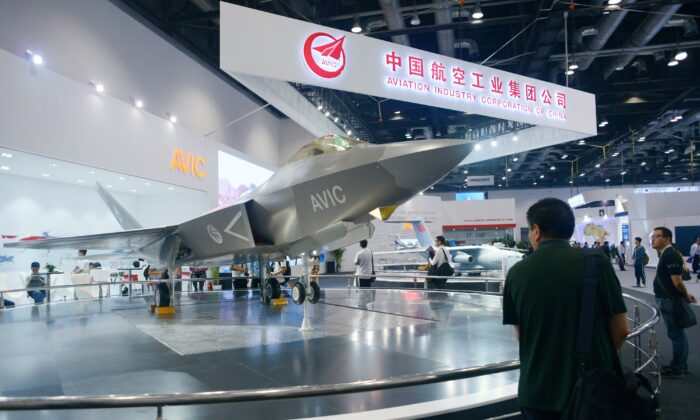 BY CATHY HE
Print
✉

Hundreds of millions of U.S. taxpayer dollars went to Chinese companies from the Paycheck Protection Program (PPP), which was designed to help small businesses survive during the pandemic, according to a new report.

A review of public PPP loan data by consultancy firm Horizon Advisory found that $192 million to $419 million in loans were given to more than 125 Chinese-owned or -invested companies operating in the United States. Many of the loans were substantial, with at least 32 Chinese-owned firms receiving more than $1 million under the program, totaling between $85 million and $180 million, it found.

The recipients included Chinese state-owned enterprises, companies that supported Beijing’s military development program, firms identified by the United States as national security threats, and media outlets controlled by the Chinese Communist Party (CCP), the report said. Many were based in critical industries such as aerospace, pharmaceuticals, and semiconductor manufacturing. These are sectors that the CCP has slated for aggressive development to achieve global dominance, with the goal of supplanting competitors in the United States and other countries.

The report said that loans went to affiliates of three Chinese companies that featured on a Pentagon list of 20 firms that are owned or controlled by the Chinese military. It found that six recipients were affiliated with state-owned companies that supply arms to China’s People’s Liberation Army, including Aviation Industry Corp. of China, China Aerospace Science and Industry, and China North Industries Group Corporation (Norinco Group).

Chinese-linked biotech companies were also identified, including California-based Dendreon Pharmaceuticals, which received between $5 million to $10 million in PPP loans. Dendreon is owned by Nanjing Xinbai, a Chinese state-invested company that is controlled by a tech conglomerate with close ties to the CCP.

Which our DEPARTMENT OF THE TREASURY gave our TAX money to via PPP and in prior to that in 2008 they used Obama’s stock market crash to their advantage also.

PPP TAX Payer money’s go to who knows who?  I tried to research who got loans and it is NOT public information – why?

When I went to search who got loans, I drilled all the way down to the comma separated value file on the website for the US Treasury.

I chose Texas because it’s where I live.

Here’s an example of the file and the granularity to which it goes.  But it NEVER says the NAME of the business.  Why? Why are we not allowed to know?

Here’s a list of companies from the US Dept. of Commerce:

The Department of Commerce’s Bureau of Industry and Security (BIS) announced it will add 24 governmental and commercial organizations to the Entity List for engaging in activities contrary to the national security or foreign policy interests of the United States. The entities, based in China, Hong Kong, and the Cayman Islands, represent a significant risk of supporting procurement of items for military end-use in China.

“The new additions to the Entity List demonstrate our commitment to preventing the use of U.S. commodities and technologies in activities that undermine our interests,” said Secretary of Commerce Wilbur Ross.

This action will prohibit the export, re-export, or in-country transfer of items subject to the Export Administration Regulations (EAR) to these entities without Department of Commerce authorization.

Pursuant to Section 744.11(b) of the EAR, the Entity List identifies persons or organizations reasonably believed to be involved, or to pose a significant risk of being or becoming involved, in activities contrary to the national security or foreign policy interests of the United States. The EAR imposes additional license requirements on, and limits the availability of most license exceptions for, exports, re-exports, and transfers (in-country) to listed entities.

The 24 entities to be added to the Entity List are:

From the Horizon researchers –from https://www.horizonadvisory.org/paycheckprotection

–they found out about some of the specific companies and they are very concerning: 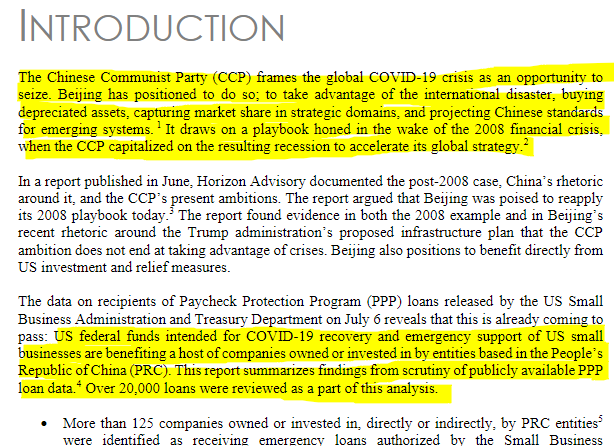 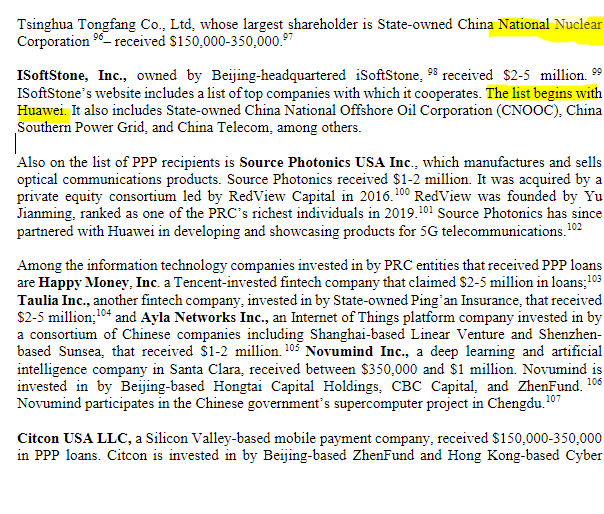 If the US can lock me up for not paying my taxes or incorrectly reporting them, HOW can they be so accurate about ME, but NOT know that CHINA was getting MY money?