Support for China’s space program also means that these partners will share their countries Intellectual Properties with the CCP.

The logo’s found on the craft are telling:

If American companies also associate with these, then how likely is it that there will be technology espionage going on?  In my not humble opinion, it’s guaranteed.

President Trump should immediately investigate associations.  There are tools that he has access to that will make these association easily evident. 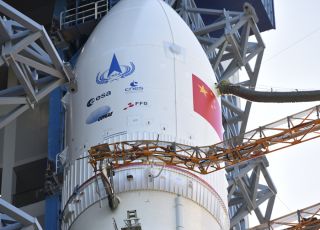 The Long March-5 rocket for China’s Tianwen-1 Mars mission was transported to the launch area at China’s Wenchang Space Launch Center on July 17, 2020. Note the logos of the European (ESA), French (CNES), Argentine (CONAE) and Austrian (FFG) space agencies in addition to that of the China National Space Agency (CNSA).
(Image: © CNSA)

Following the completion of multiple integrated rehearsals, China is ready for the launch of its first fully homegrown Mars mission.

Tianwen-1, which consists of an orbiter, lander and rover, is scheduled to lift off in late July or early August, according to the China National Space Administration (CNSA). Speculation is that the launch is targeted for July 23, the opening of the window.

In a recent interview with China Central Television (CCTV), Tianwen-1 deputy director Zhang Yu said that scientists have conducted joint tests on multiple systems of the Mars mission at all levels and are ready for the launch.

“We have carried out multiple coordinated maneuvers over flight and control together with launching site system, the rocket system and the probe system, which have verified the validity of interfaces between different systems and the flight program, and also indicated that we are capable of conducting the first Mars probe of our country,” said Zhang.

“We formatted an orbit kinetic model that has [the] same orbit with the rover, as well as the corresponding measurement model,” Zhang added. “Then we established the corresponding control algorithm to ensure that the probe lands on the designated location of Mars at the designated time, and can automatically capture information, to ensure it can conduct flight and control [its] mission across Mars.”

To cope with the challenges ahead, the Beijing Aerospace Control Center set up a Mars exploration flight control team at the start of 2018.

CCTV reported that, despite the coronavirus pandemic this year, the team has been actively adjusting personnel allocation, coordinating the test and control network and mapping out switching schemes for different sites, in order to meet the needs of the Mars probe.

The center will also adopt the new software and hardware of the flight and control system to assure the correct performance of China’s domestically manufactured hardware system.

To do so, the country has beefed up its deep-space monitoring network capability to support the Tianwen-1 mission. Once the probe has entered Earth-Mars transfer orbit, the control center’s two monitoring stations, in Kashgar of northwestern Xinjiang’s Uygur Autonomous Region, and Jiamusi, in northeastern Heilongjiang Province, will swing into action.

At the Long March-5 rollout, the booster’s protective payload fairing was seen to be adorned with European (ESA), French (CNES), Argentine (CONAE) and Austrian (FFG) space agency logos, in addition to that of the CNSA.

Tianwen-1 will use ESA’s Estrack communications network, and in several ways.

Estrack’s Kourou ground station, in French Guiana, South America, will follow the mission on departure from China. Extremely precise navigation/trajectory determination, via ESA’s stations in Australia and Spain, will also be provided as Tianwen-1 makes its way to Mars.

“Successful space travel often means pooling resources, and at ESA we are happy to support the new Martian mission with our Estrack network of antennas as well as with our Mars Express spacecraft, currently in orbit at the Red Planet,” ESA’s Beatriz Arias told Space.com.

ESA’s Kourou ground station will catch signals from the spacecraft as it separates from the launcher after liftoff, providing information on the probe’s distance and movements and enabling communications.

After liftoff and until Tianwen-1 enters Martian orbit, ESA’s New Norcia (Australia) and Cebreros (Spain) stations will make a total of eight communication linkups with the spacecraft to support a highly precise navigation/trajectory determination technique known as Delta-DOR (short for “Delta-Differential One-way Range”).

Once at the Red Planet, the Mars Express orbiter will provide data relay support, acting as a go-between, alongside the Chinese orbiter, for the data gathered by China’s rover on the Martian surface and ground stations on Earth, ESA officials have said. However, this is backup only, as China’s own orbiter will provide the prime relay service.

Argentina’s Comisión Nacional de Actividades Espaciales (CONAE) is thought to be tied to Tianwen-1 by way of a Chinese-run tracking station installed in Las Lajas, Argentina. The facility played a role in China’s landing of the Chang’e-4 spacecraft on the far side of the moon in January 2019.

The Institute for Research in Astrophysics and Planetology (IRAP) in Toulouse, France is collaborating with China on the Tianwen-1 rover.

CNES is the program manager of this collaboration, Sylvestre Maurice of IRAP told Space.com.

“For their Laser Induced Breakdown Spectroscopy (LIBS) instrument, we have delivered a calibration target that is a French duplicate of a target which is on [NASA’s] Curiosity [Mars rover]. The idea is to see how the two datasets compare,” Maurice said.

Meanwhile, the Austrian space sector, under the Austrian Research Promotion Agency (FFG), has been reported to aid in the development of a magnetometer installed on the Chinese Mars orbiter.

The Space Research Institute (Institut für Weltraumforschung, IWF) of the Austrian Academy of Sciences in Graz has confirmed the group’s contribution to the Tianwen-1 magnetometer and helped with the calibration of the flight instrument, explained Andreas Geisler, head of the FFG Aeronautics and Space Agency.

“The Aeronautics and Space Agency of the Austrian Research Promotion Agency has framed the cooperation on the basis of an agency to agency memorandum of understanding (MoU) with CNSA,” Geisler told Space.com.

Leonard David is author of “Moon Rush: The New Space Race” (National Geographic, 2019). A longtime writer for Space.com, David has been reporting on the space industry for more than five decades. Follow us @Spacedotcom, Facebook or Google+. This version of the story published on Space.com.

Join our Space Forums to keep talking space on the latest missions, night sky and more! And if you have a news tip, correction or comment, let us know at: community@space.com.