U.S. Attorney General William Barr, acting director of national intelligence Richard Grenell, and other senior officials called on a federal judge to prevent the disclosure of files related to the role of the government of Saudi Arabia in the September 11 attacks. The officials told the judge in the civil case that the release of the files would endanger national security.

The files are being sought by families of the 9/11 victims who have spent the last two decades attempting to uncover the truth about the attacks. The families filed a lawsuit in federal district court in New York in 2017 as part of their effort to uncover the role of the Saudi government. What is publicly known is that the alleged 9/11 hijackers had a relationship with Saudi government officials. As Pro Public reported, at the 2019 White House September 11 memorial, U.S. President Donald Trump promised the families he would help them uncover the truth about 9/11. He made similar promises while he was campaigning for president.

“He looked us in the eye on 9/11, he shook our hands in the White House and said, ‘I’m going to help you—it’s done’,” Brett Eagleson, a banker whose father was killed in the World Trade Center, told Pro Publica. “I think the 9/11 families have lost all hope that the president is going to step up and do the right thing. He’s too beholden to the Saudis.”

The Trump Administration stated that the national security threat was so great that even sharing the reasoning behind the request for secrecy could cause harm. According to Pro Publica, AG Barr told the court that public discussion of the issue “would reveal information that could cause the very harms my assertion of the state secrets privilege is intended to prevent.”

Pro Publica notes that four statements from FBI and Justice Department officials were also under seal and can not be seen by the public. Another five statements from FBI, Justice Department, and CIA officials were only seen by the judge and could not even be shared with the families’ lawyers. Steven Pounian, a lawyer for the families also suggested that “there must be some deep, dark secret that they’re still trying very hard to hide after almost 20 year,” and that it “might be a Saudi government secret.” READ MORE:

Listen to the insightful Thomas Paine Podcast Below —

from – https://truepundit.com/cover-up-ag-barr-blocks-release-of-9-11-documents-betrays-victims-families-he-looked-us-in-the-eye-on-9-11-shook-our-hands-in-white-house-and-said-im-going-to/
Barr is not in his position out of the goodness of his heart Attorney and Fox News legal analyst Gregg Jarrett spoke to Lou Dobbs Thursday evening about a report out by the Washington Post claiming President Trump was eyeing William Barr as his top choice to be the next Attorney General.

Barr, 68, currently works as a lawyer at Kirkland & Ellis and served as United States Attorney General from 1991-1993 under George H.W. Bush.

The decision is not yet final; President Trump may choose someone else to serve as Attorney General.

Gregg Jarrett cautioned against Trump choosing Barr to replace Sessions as AG saying he is a Washington insider.

As for William Barr, yes unquestionable integrity, a fine reputation, great experience – he brings gravitas to the job but he is an establishment figure at a time that I think we need a disruptor as Attorney General,” Jarrett said, adding, “Somebody who would vigorously go after corrupt officials at the FBI and Department of Justice who were abusing their positions of power and attempting to undermine democracy.”

Jarrett then concluded, “I’m afraid Barr is not that guy.”

Jeff Sessions held this country hostage for a year and a half when he decided to recuse himself the first day on the job. Sessions’ recusal ushered in the appointment of Special Counsel Robert Mueller since Deputy Attorney General took over and remains the de facto AG.

President Trump must stay away from establishment insiders who will never dare take on the DC swamp.

#AmericaFirst– @GreggJarrett: @POTUS has a duty to direct the AG what to do. Barr is an establishment figure at a time when we need a disruptor, someone who would go after corrupt officials at FBI, DOJ who abused their power to undermine Democracy. #MAGA #TrumpTrain #Dobbs 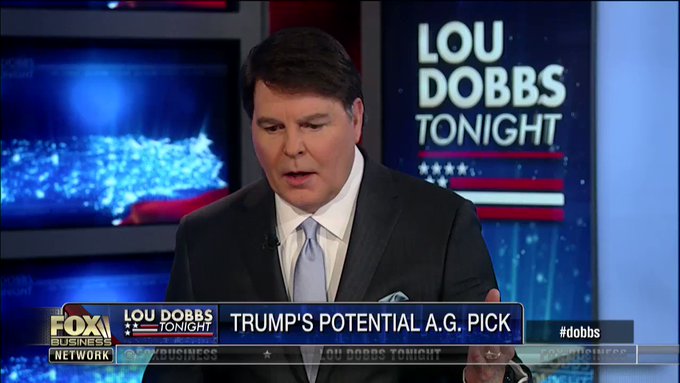