If the appellate court finds this type of aggression against the Constitution being waged against worship, then should the leaders of that city not be removed for their illegal orders?

Judge Justin Walker, who has been nominated by Donald Trump to the D.C. Circuit and is close to Supreme Court Justice Brett Kavanaugh and Senate Majority Leader Mitch McConnell, found that the city unconstutionally prohibited drive-in religious services while not imposing such restrictions on parking at restaurants and liquor stores. 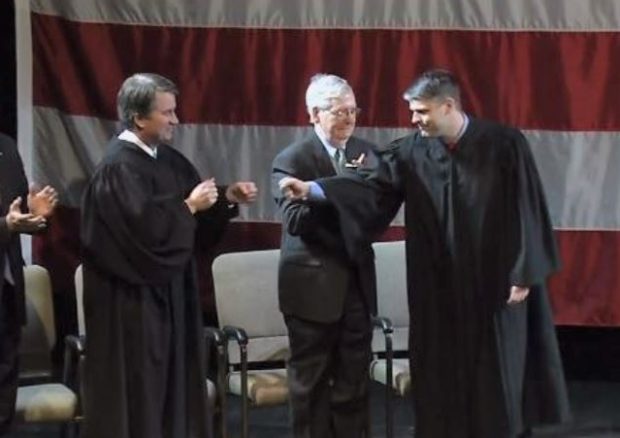 The Mayor of Louisville, Kentucky, has threatened to fine anyone who attends a drive-in Easter Sunday church service, even though attendees would remain in their cars in the parking lot.

The On Fire Christian Center sought an emergency Temporary Restraining Order (TRO)(pdf.) which was granted today by federal Judge Justin Walker in the Western District of Kentucky. Walker, a former clerk for Supreme Court Justice Brett Kavanaugh and protege of Mitch McConnell, recently was nominated to the Court of Appeals for the District of Columbia Circuit, and his nomination is expected to incide a scorched-earth opposition.

The TRO, granted ex parte without giving the City of Louisville a chance to be heard, provides in part:

The opinion does not question the governments ability to impose restrictions on the public to fight a pandemic. The central reasoning of the opinion is that because Louisville does not impose similar restrictions on parking at drive-through restaurants or liquor stores, singling out a religious establishment for more harsh treatment is unconstitutional.

“As we are all painfully aware, our nation faces a public health emergency caused by the exponential spread of COVID-19, the respiratory disease caused by the novel coronavirus SARS-CoV-2.”35 Four days ago, defendant Mayor of Louisville Greg Fischer said it was “with a heavy heart” that he was banning religious services, even if congregants remain in their cars during the service.36 He asserted, “It’s not really practical or safe to accommodate drive-up services taking place in our community.”37 Drive-through restaurants and liquor stores are still open.38

On Sunday, tomorrow, Plaintiff On Fire Christian Center wishes to hold an Easter service, as Christians have done for two thousand years. On Fire has planned a drive-in church service in accordance with the Center for Disease Control’s social distancing guidelines.49

In this case, Louisville is violating the Free Exercise Clause “beyond all question.”53

Here, Louisville has targeted religious worship by prohibiting drive-in church services, while not prohibiting a multitude of other non-religious drive-ins and drive-throughs – including, for example, drive-through liquor stores. Moreover, Louisville has not prohibited parking in parking lots more broadly – including, again, the parking lots of liquor stores. When Louisville prohibits religious activity while permitting non-religious activities, its choice “must undergo the most rigorous of scrutiny.”57 That scrutiny requires Louisville to prove its interest is “compelling” and its regulation is “narrowly tailored to advance that interest.”58

Louisville will be (highly) unlikely to make the second of those two showings. To be sure, Louisville is pursuing a compelling interest of the highest order through its efforts to contain the current pandemic. But its actions violate the Free Exercise Clause “beyond all question”59 because they are not even close to being “narrowly tailored to advance that interest.”60

One thought on “12 April -Cities using Covid to remove the Constitution – They MUST be sued? Why? Why must they be sued, so that the Constitution is upheld? Why are they not then recalled from holding that office?”