In the 1980s both men invested large sums in the Republican candidate’s first private equity fund, started during his years at Bain & Company, which launched his now highly controversial career in finance.

Romney is under increasing pressure to release details of his business affairs including tax returns for the years before 2010 and details of offshore holdings, including a Swiss bank account.

Flamboyant publishing tycoon Maxwell was the former head of the left-wing Mirror Group newspapers and a one-time owner of the New York Daily News.

He died in mysterious circumstances in 1991 at the age of 68 after falling overboard from his luxury yacht off the Canary Islands after which it was discovered he had plundered hundreds of millions from an employee pension scheme.

Lyons, who died in 2008, was one of the notorious ‘Guinness Four’ convicted for a massive share trading fraud in which they attempted to inflate the price of Guinness shares to assist a take-over bid for Scottish drinks company Distillers.

He was subsequently fined £4 million for theft and false accounting and stripped of his knighthood.

In 1984 Lyons, a former colleague of Mr Romney’s at Bain & Company, along with members of his family invested almost $3million in Mr Romney’s capital fund.

He then recruited Maxwell who invested $2 million in the fund.

Both Lyons and Maxwell kept money in tax havens and the latest revelations will be a blow to Romney whose financial career is increasingly being brought into question.

Romney has claimed his fortune and career history is proof of his ability to run the country.

But Barrack Obama has accused him of tax dodging and profiteering from the destruction of companies. 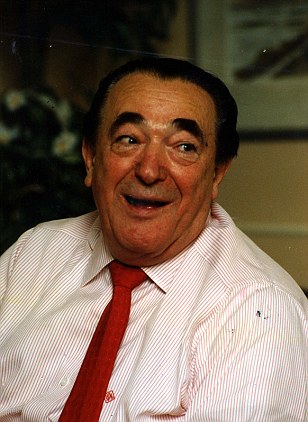 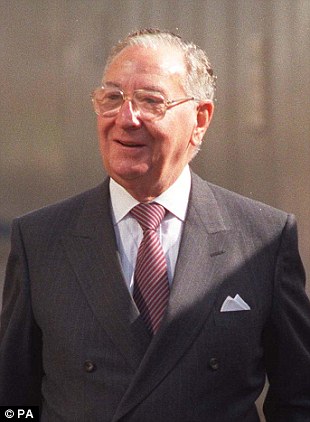 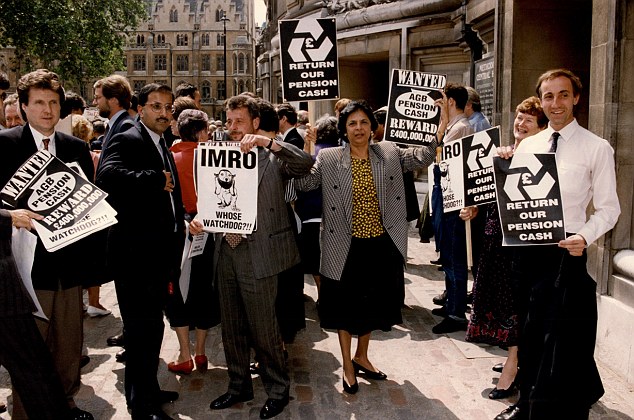 Scandal: Daily Mirror workers demonstrating, after £458million had been looted from the companies pension scheme by the late owner Robert Maxwell

Mr Romney was a senior management consultant at Bain during one of the most controversial periods in the firm’s history when they became caught up in the Guinness scandal as advisers to the drinks firm.

Yes – Ghislaine who is associated with Jeffery Epstein

Bain Capital, the firm’s investment arm, was set up by Mr Romney in 1981 and run from his Boston office.

Lyons was hired to help set up a British office and became the fund’s first investor with a $2.5 million stake via a front company in Panama.

According to the Daily Telegraph Yorkshire-born Lyons reported back to Boston that he had signed up his friend Maxwell.

On the attack: Barrack Obama has accused Romney of tax dodging and profiteering from the destruction of companies

One Bain executive based in London at the time told the paper: ‘Jack took an interest in Bain almost as if we were his sons.

‘He wanted us to succeed in the UK and he introduced us to a lot of people . . . I remember attending a luncheon in London with Robert Maxwell.’

Around $12 million was invested by Bains partners including Mr Romney who is believed to have put up at least $160,000.

Among the funds other investors were families from El Salvador who were later linked to Right-wing ‘death squads’ who murdered thousands during the country’s civil war.

The fund was phenomenally successful, and according to a prospectus, yielded an average return of 173 per cent a year on stakes in 21 firms.

One investor told the Telegraph: ‘Every couple of years I would get a cheque.

‘It was always a lot more than I had put into it’.

In 1986 Lyons joined a group of Guinness allies buying up stock in the firm in an attempt to boost the share price prior to a takeover bid for rival firm Distillers.

It was a success and at the time Bill Bain, the firm’s founder and Mr Romney’s mentor, wrote to  Lyons saying: ‘We are all delighted and look forward to hearing the story of how you managed to pull it off.’

Lyons and three others were later convicted of theft and false accounting. Lyons avoided jail due to ill health. but he was stripped of his knighthood and CBE, and fined £4 million.

Although there is no suggestion that Mr Romney, nor anyone at Bain in Boston had any knowledge of the wrongdoing a Bain employee in London described the period as ‘traumatic’.

He told the Telegraph: ‘Mitt was just another partner watching this thing unfold.’

Another British former colleague described him as ‘bloodless’ adding ‘He was the sort of person that you would admire rather than like, and I think that continues to bedevil his political career.’