The Democrats honestly think that we don’t understand that these people are frauds?  The “young trans person” was a plant.  That’s obvious. Furthermore, the CHILD should be getting help for a mental condition.  This is a mental illness and it’s cruel for children to have untreated conditions continue to fester.  No other illness would go untreated.  It’s cruel and inhumane.  This leaves the child with a potential life threatening condition, in which people with it commit the most suicides per population percentage.  It’s not right.  People should be helped not driven farther to insanity that many can’t function in, because it’s not a NATURAL condition, but rather an aberration to that which is NATURAL.

Sen. Elizabeth Warren, D-Mass., vowed over the weekend that she would allow a “young trans person” to interview her choice for Secretary of Education, potentially granting them veto power over a key Cabinet official.

It’s unclear who exactly Warren was referring to but a 9-year-old who identifies as transgender previously asked Warren what she would do in her “first week as president to make sure kids like me feel safer in school.” The child then asked, “And what do you think schools should do better so that I don’t have to worry about anything but my homework?”

Warren was responding Sunday to a question about students not learning “anything about LGBT history or sexual education until they either go on the internet or they learn it in college.” “Seems a little late,” Warren initially replied before taking an apparent shot at the current Education Secretary Betsy DeVos by calling for “a Secretary of Education who believes in public education.”

This in reference to a question about sex education/LGBTQ history in public schools. 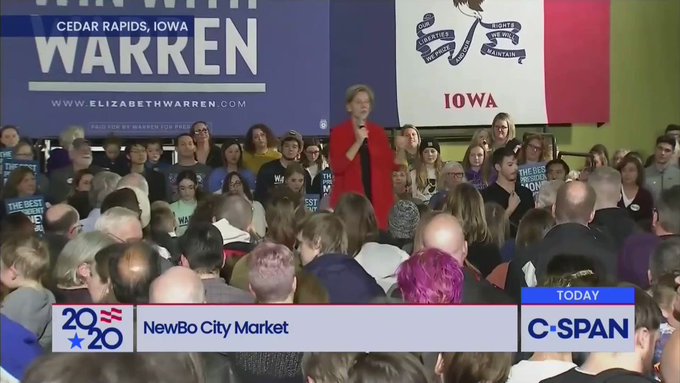 Warren’s campaign did not respond to Fox News’ multiple requests for comment.

The initial questions came during a CNN town hall when Warren famously ridiculed conservatives who held traditional views on marriage. The answer appeared to be teed up by a donor who led the liberal organization co-hosting the town hall.

Warren’s comments seemed to fit a pattern of making bold pledges surrounding gender. Earlier this month, Warren said she would “build a Cabinet and senior leadership team that reflects the full diversity of America, including having at least 50 [percent] of Cabinet positions filled by women and nonbinary people.”