Man this is like scenes from The Walking Dead! Dead Bodies just laying in the Isle of the hospital. This is not going to turn out well for the World! pic.twitter.com/wH1wwC3zYX

Hunan Seafood Market – located very close to the lab.  Could it not be conceivable that they KNEW where the seafood would be going and theretofore contaminated the people handling it?  For the PURPOSE of spreading it to the WEST?

So, why has the WHO or CDC not shut down the ports?  They get money and kickbacks from China

Many DINO’s are in bed with the CHINESE, but don’t be mistaken, some are also RINO’s and some that you may least suspect. 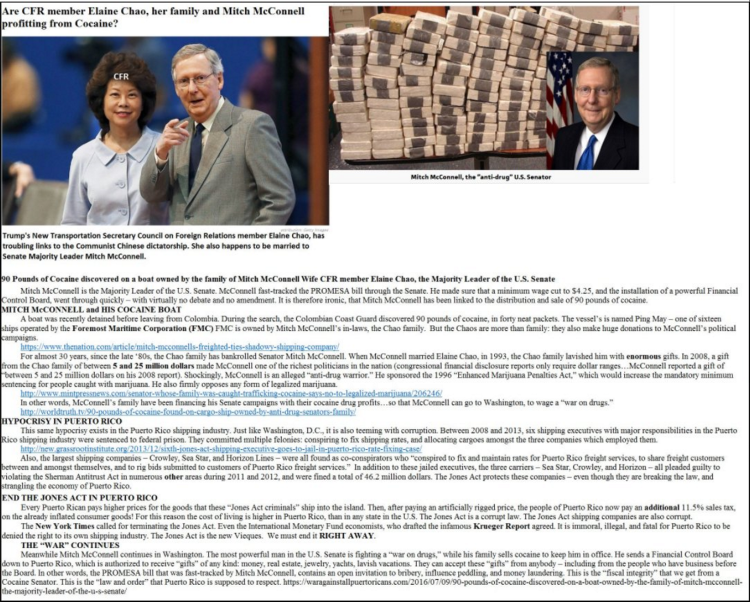 more info on Elaine Chao and family below the article

In this photo released by China’s Xinhua News Agency, a medical worker writes their colleague’s name on a protective suit to aid in identification as they work at Zhongnan Hospital of Wuhan University in Wuhan in central China’s Hubei Province, … more >

The deadly animal virus epidemic spreading globally may have originated in a Wuhan laboratory linked to China’s covert biological weapons program, according to an Israeli biological warfare expert.

The laboratory is the only declared site in China capable of working with deadly viruses.

“Certain laboratories in the institute have probably been engaged, in terms of research and development, in Chinese [biological weapons], at least collaterally, yet not as a principal facility of the Chinese BW alignment,” Mr. Shoham told The Washington Times.

Work on biological weapons is conducted as part of a dual civilian-military research and is “definitely covert,” he said in an email.

Mr. Shoham holds a doctorate in medical microbiology. From 1970 to 1991 he was a senior analyst with Israeli military intelligence for biological and chemical warfare in the Middle East and worldwide, holding the rank of lieutenant colonel.

China in the past has denied having any offensive biological weapons. The State Department, in a report last year, said it suspects China has engaged in covert biological warfare work.

A Chinese Embassy spokesman did not return an email seeking comment.

Chinese authorities so far have said the origin of the coronavirus that has killed scores and infected hundreds in in central Hubei Province is not known.

Gao Fu, director of the Chinese Center for Disease Control and Prevention, told state-controlled media initial signs as of Thursday indicated the virus originated from wild animals sold at a seafood market in Wuhan.

One ominous sign, said a U.S. official, is the that false rumors since the outbreak began several weeks ago have begun circulating on the Chinese Internet claiming the virus is part of a U.S. conspiracy to spread germ weapons.

That could indicate China is preparing propaganda outlets to counter future charges the new virus escaped from one of Wuhan’s civilian or defense research laboratories.

The World Health Organization is calling the microbe novel coronavirus 2019-nCoV. At a meeting in Geneva Thursday, the organization stopped short of declaring a Public Health Emergency of International Concern.

The virus outbreak causes pneumonia-like symptoms and prompted China to deploy military forces to Wuhan this week in a bid to halt the spread. All travel out of the city of 11 million people was halted.

The Wuhan institute has studied coronaviruses in the past, including the including the strain that causes Severe Acute Respiratory Syndrome, or SARS, H5N1 influenza virus, Japanese encephalitis, and dengue. Researchers at the institute also studied the germ that causes anthrax – a biological agent once developed in Russia.

“Coronaviruses (particularly SARS) have been studied in the institute and are probably held therein,” he said. “SARS is included within the Chinese BW program, at large, and is dealt with in several pertinent facilities.”

It is not known if the institute’s array of coronaviruses are specifically included in biological weapons program but it is possible, he said.

Asked if the new coronavirus may have leaked, Mr. Shoham said: “In principle, outward virus infiltration might take place either as leakage or as an indoor unnoticed infection of a person that normally went out of the concerned facility. This could have been the case with the Wuhan Institute of Virology, but so far there isn’t evidence or indication for such incident.”

After researchers sequence of the genome of the new coronavirus it might be possible to determine or suggest its origin or source.

Mr. Shoham, now with the Begin-Sadat Center for Strategic Studies at Bar Ilan University in Israel, said the virology institute is the only declared site in China known as P4 for Pathogen Level 4, a status indicating it uses the strictest safety standards to prevent the spread of the most dangerous and exotic microbes being studied.

The former Israeli military intelligence doctor also said suspicions were raised about the Wuhan Institute of Virology when a group of Chinese virologists working in Canada improperly sent samples to China of what he said were some of the deadliest viruses on earth, including the Ebola virus.

In a July article in the journal Institute for Defence Studies and Analyses, Mr. Shoham said the Wuhan institute was one of four Chinese laboratories engaged in some aspects of the biological weapons development.

He identified the secure Wuhan National Biosafety Laboratory at the institute as engaged in research on the Ebola, Nipah, and Crimean-Congo hemorrhagic fever viruses.

The Wuhan virology institute is under the Chinese Academy of Sciences. But certain laboratories within it “have linkage with the PLA or BW-related elements within the Chinese defense establishment,” he said.

In 1993, China declared a second facility, the Wuhan Institute of Biological Products, as one of eight biological warfare research facilities covered by the Biological Weapons Convention (BWC) which China joined in 1985.

The Wuhan Institute of Biological Products is a civilian facility but is linked to the Chinese defense establishment, and has been regarded to be involved in the Chinese BW program, Mr. Shoham said.

China’s vaccine against SARS is probably produced there.

“This means the SARS virus is held and propagated there, but it is not a new coronavirus, unless the wild type has been modified, which is not known and cannot be speculated at the moment,” he said.

“Information indicates that the People’s Republic of China engaged during the reporting period in biological activities with potential dual-use applications, which raises concerns regarding its compliance with the BWC,” the report said, adding that the United States suspects China failed to eliminate its biological warfare program as required by the treaty.

“The United States has compliance concerns with respect to Chinese military medical institutions’ toxin research and development because of the potential dual-use applications and their potential as a biological threat,” the report added.

The biosafety lab is located about 20 miles from the Hunan Seaford Market that reports from China say may have been origin point of the virus.

Rutgers University microbiologist Dr. Richard Ebright told London’s Daily Mail that “at this point there’s no reason to harbor suspicions” the lab may be linked to the virus outbreak.