Authorities along the U.S. border are on alert after receiving a law enforcement intelligence warning about a possible suicide bomber heading north toward the U.S.-Mexico Border. Breitbart obtained an exclusive copy of the leaked official document from a source operating under the umbrella of the Department of Homeland Security (DHS). The official report was circulated to law enforcement partners along the U.S. border, the intelligence originated from Homeland Security Investigations (HSI), and the report was circulated by Border Patrol Intelligence. Breitbart confirmed the authenticity of the document with multiple law enforcement sources; however, the details contained within the report have not been verified by Breitbart and the purpose of officials circulating the warning is to alert other authorities and to seek help in verifying the accuracy of the information.

The report being authentic does not verify that a suicide bomber is actually headed toward the U.S.-Mexico Border, but rather that such intelligence was received from a credible source or sources. 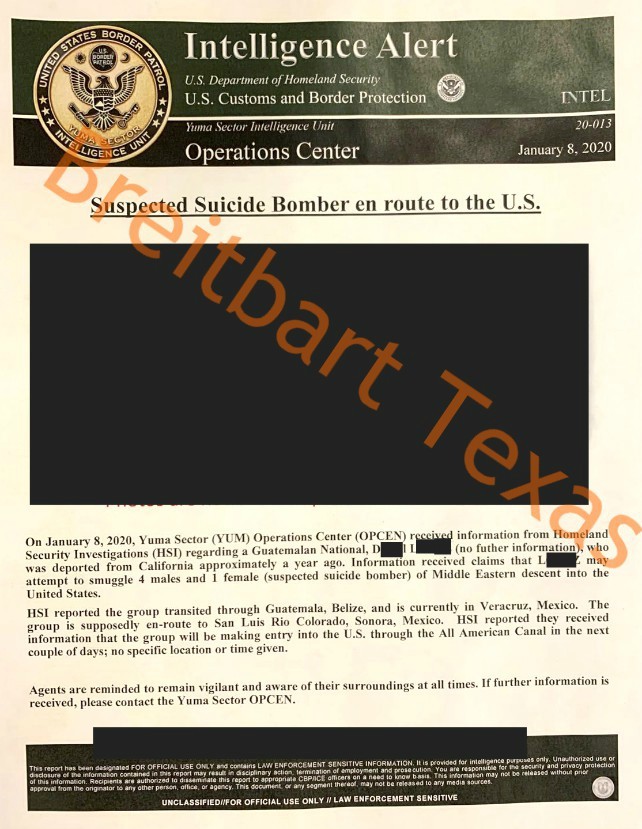 According to the document, on January 8, 2020, the Yuma Sector Operations Center received information from HSI about a previously deported Guatemalan national named “…” who is allegedly leading a group of four Middle Eastern males and one female to the U.S. from Mexico. The female is described as a “suspected suicide bomber.”

The report stated that according to HSI, the group already traveled through Guatemala, Belize, and is currently in Veracruz, Mexico. The described group is expected to travel to San Luis Rio Colorado in the Mexican state of Sonora, just south of Arizona.

Breitbart redacted contact information and images from the official report, as well as the name of the alleged individual accused of leading the group.

Ildefonso Ortiz is an award-winning journalist with Breitbart Texas. He co-founded Breitbart Texas’ Cartel Chronicles project with Brandon Darby and senior Breitbart management. You can follow him on Twitter and on Facebook. He can be contacted at Iortiz@breitbart.com.

Jaeson Jones is a retired Captain from the Texas Department of Public Safety’s Intelligence and Counterterrorism Division and a Breitbart Texas contributor. While on duty, he managed daily operations for the Texas Rangers Border Security Operations Center.

Brandon Darby is the managing director and editor-in-chief of Breitbart Texas. He co-founded Breitbart Texas’ Cartel Chronicles project with Ildefonso Ortiz and senior Breitbart management. Follow him on Twitter and Facebook. He can be contacted at bdarby@breitbart.com.