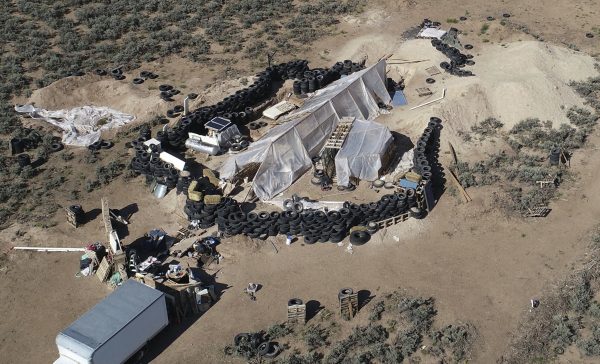 A ramshackle compound in the desert area of Amalia, N.M., on Aug. 10, 2018. A similar compound has been discovered in Alabama with links to the same group of accused terrorists. (Brian Skoloff/File via AP)
CRIME AND INCIDENTS

FBI investigators have found a training compound in Alabama linked to a group of suspected homegrown terrorists.

An FBI search warrant described the property in Macon County, Alabama, as a “makeshift military-style obstacle course,” according to a report by the Sinclair Broadcast Group.

Identified in reports as a “homegrown Islamic terror compound,” it allegedly belongs to a group led by 40-year-old Siraj Wahhaj, an imam indicted on federal charges related to firearms violations and terrorism.

Breaking: The FBI has uncovered a terror training camp in Macon County, Alabama. The group responsible for the camp was led by Siraj Wahhaj. Wahhaj managed a New Mexico terror compound uncovered last year, which trained children to carry out attacks.

Wahhaj and four other suspects, Jany Leveille, 36, Hujrah Wahhaj, 38, Subhanah Wahhaj, 36, and Lucas Morton, 41, face a range of firearms and terrorism-related charges amid accusations they conspired to support planned attacks on U.S. law enforcement officers and other government employees.

Federal prosecutors commented in March about the charges against Wahhaj and others in a new indictment that brought fresh terror-related allegations.

“The superseding indictment alleges a conspiracy to stage deadly attacks on American soil,” U.S. Attorney John Anderson said in a written statement. “These allegations remind us of the dangers of terrorism that continue to confront our nation.”

Charging documents allege Wahhaj and others were conducting weapons training with assault rifles at a ramshackle compound in New Mexico, where children were being trained to commit school shootings.

“He poses a great danger to the children found on the property as well as a threat to the community as a whole due to the presence of firearms and his intent to use these firearms in a violent and illegal manner,” prosecutor Timothy Hasson wrote in court documents.

The New Mexico compound, located on the outskirts of Amalia, a tiny town near the Colorado border, is reportedly similar to the one FBI agents found in Alabama.

In an interview with Sinclair, former FBI agent Tim Fuhrman warned of the increasing threat of domestic terror that “exists in every region of the United States and affects all walks of life.”

“Just because you’re in a small town or a small state does not mean you might not potentially have individuals engaged in the types of activities that would call into question threats to national security,” Fuhrman told the outlet.

The FBI is currently pursuing 850 domestic terrorism investigations, Assistant Director for Counterterrorism Michael McGarrity said May 8 while speaking to the House Homeland Security Committee, according to CNN.

“The FBI assesses domestic terrorists collectively pose a persistent and evolving threat of violence and economic harm to the United States,” McGarrity said.

The FBI encourages citizens to protect themselves against terrorism by remaining aware of their surroundings, refraining from oversharing personal information, and reporting suspicious activity.

The remains of 3-year-old Abdul-Ghani Wahhaj were found at the New Mexico compound, where authorities found 11 malnourished children, guns and ammunition, and a firing range.

The search of the compound was sparked by an investigation into the whereabouts of the missing 3-year-old, who was Siraj Wahhaj’s son and had suffered seizures.

The boy stopped breathing and soon died during a ceremony, prosecutors said. Wahhaj had placed his hand on the boy’s head and was reciting verses from the Quran just before the boy began suffering seizures and foaming at the mouth. He was soon dead.

Wahhaj’s 15-year-old son recounted to officials that one of the adults told him the spirit of the dead boy would return as “Jesus” to direct the group on where to carry out the violent attacks they were allegedly training for.

Prosecutors said Jany Leveille, Wahhaj’s wife, led the group and was the one who spread the belief that the boy would be reincarnated to attack banks, schools, and government agencies, USA Today reported, citing an FBI agent’s testimony.

“Jany had a message from God that they needed to leave and head to New Mexico and that Abdul Wahhaj, once the demons were expelled from his body through religious rituals, that he would become Jesus and once he became Jesus, he would instruct the others on the property, the family, what corrupt institutions to get rid of,” FBI agent Travis Taylor, who interviewed two of the oldest children, testified.

Kidnapping charges were brought against Leveille, Hujrah Wahhaj, Subhana Wahhaj, and Lucas Morton in connection with the child’s abduction and subsequent death.

They potentially could have faced the death penalty if convicted of abducting the child because authorities said it resulted in the boy dying.

Prosecutors said in a filing ahead of a court hearing in April that they wouldn’t seek capital punishment against the four suspects.

The Associated Press and Reuters contributed to this report. Aziz Sayyed being escorted to the Madison County Courthouse in July 2017.

In federal court in Birmingham, Aziz Sayyed, 23, of Huntsville, entered the guilty plea to charges that he sought to aid a foreign terrorist organization.

Federal prosecutors say after watching videos from the Islamic State terrorist group, Sayyed purchased ingredients to make an explosive and told others about his hope to use it in a car bomb or explosive belt. Sayyed also shared the videos and expressed his support for the Islamic State and terrorist attacks.

According to the plea agreement, Sayyed told people he wanted to attack police stations or the Redstone Arsenal military installation in Huntsville. He was arrested after discussing his plans with an undercover FBI agent in June.

Sayyed’s plea agreement stipulates a 15-year prison sentence. He is scheduled to be sentenced in June.

U.S. Attorney Jay E. Town says a tip led to the investigation and arrest. Town released a statement saying “Sayyed was brought to our attention because citizens saw something, so they said something. If we are to keep our cities safe, no matter the type of suspicious activity, our community must play an active role.” TUSCALOOSA, Ala. (AP) — A woman accused of trying to help al-Qaeda has pleaded guilty in Alabama to a charge of concealing terrorism financing.

A statement from prosecutors shows she gave instructions on how to send money to the mujahedeen and included the comment: “You can’t have war without weapons.” Authorities say she also put the FBI in touch with someone who could get money to al-Qaeda.

A criminal information against the woman was filed Wednesday, the 18th anniversary of the 9/11 terror attacks.

From Wikipedia, the free encyclopedia

Jump to navigationJump to search

Omar Shafik Hammami (Arabic: عمر شفيق همّامي‎, Umar Shafīq Hammāmī; 6 May 1984 – 12 September 2013),[1] also known by the pseudonym Abu Mansoor al-Amriki (Arabic: أبو منصور الأمريكي‎, Abū Manṣūr al-Amrīkī), was an American citizen who was a member and leader in the Somali Islamist militant group al-Shabaab.[2] A federal warrant for his arrest was issued in 2007. In November 2012, the FBI added Hammami to its Most Wanted Terrorists list.

Omar was raised in a Christian household with an American Protestant mother and a Syrian-born Muslim father.[3] Hammami began to identify as Muslim in high school, after traveling to Syria and meeting his Muslim relatives, and proceeded to drop out of college. After moving to Toronto, Ontario, Canada, and marrying a Somali-Canadian woman in 2004, he traveled with her to Egypt in 2005. He then abandoned his wife and infant daughter to join Al-Shabaab in Somalia in late 2006. They divorced, and by 2009 he had married a Somali woman and had another daughter.

Hammami served as a commander, propagandist, and recruiter.[2] He was rumored to have been killed in March and July 2011 but later appeared again in videos. In December 2012, Al-Shabaab posted a rebuke online of what it called his “narcissistic pursuit of fame.”

Hammami was killed by al-Shabaab militants on 12 September 2013.[4]

Hammami was born to Shafik Hammami and Debra Hadley and grew up in Daphne, Alabama, with an older sister Dena.[5] Hammami’s father, Shafik, a Syrian Muslim, grew up in Damascus, Syria and moved to Alabama for college, later becoming a civil engineer.[5][6] His mother, Hadley, is of Irish descent[7] and was a former schoolteacher.[8] The children were initially raised as Southern Baptist but also practiced Muslim culture at home. Finding her father too restrictive, Dena left the home at 16 and went to live with friends.[5]

Hammami was president of his sophomore class at Daphne High School and was in the Advanced Placement program.[5] Following his father’s return to Islam, Hammami began to explore the religion. He grew flamboyant about his faith in high school, convincing his friend Bernie Culveyhouse to convert to Islam as well. He left high school early to start college.[5] Friends in school thought of him as a leader.[9]

Over time, Hammami grew increasingly religious. While in college, he became influenced by Tony Salvatore Sylvester, an American convert to Islam at the Masjid in Mobile, Alabama and Hamammi became a Salafi.[5] He served as president of the Muslim Students’ Association at the University of South Alabama.[10] His theological stance caused him conflict with his father, who asked him to leave home in 2002. Hammami also dropped out of college.[5]