And the cast gets larger and larger – there has to be a huge under-girder to support this heavy a top !!!!

Both the CIA and the FBI – must be dismantled and a new agency with a NEW mission statement created.  These agencies are DONE.  They are much to corrupt to salvage anything of any of them.

Atkinson also oversaw the FBI lovers who altered the FISA warrant.  This will soon be reported in the DOJ IG’s FISA Abuse report.  Today we point out that Atkinson’s wife is connected to Fusion GPS.

Last weekend we learned from another leak to the Washington Post, that an individual in Obama’s FBI altered documents that provided support for a FISA Warrant obtained to spy on candidate and President Trump.

The individual (or individuals) was soon identified as Kevin Clinesmith who worked with his reported lover Sally Moyer for the current Intelligence Community (IC) Inspector General (IG), Michael Atkinson.

If you have followed the case closely, the intentional removal of Peter Strzok in combination with the explanation of the lawyer’s FISA responsibilities; and in combination with prior reporting of FBI lawyer 2; it seems pretty obvious the line-level lawyer was Kevin Clinesmith.

If the WaPo article had added all the detail and left in how the line-level attorney worked for Peter Strzok everyone would have known who it was. Hence they put in more details about his activity but removed the Strzok reference.

Kevin Clinesmith was one of the key FBI small group members on the original Clinton investigation known as the “mid-year exam”, or in text messages the “MYE”.

Within the MYE Clinesmith was one of the key legal staff working with Peter Strzok. Clinesmith was lawyer #2 for Strzok who eventually transferred to the subsequent Crossfire Hurricane investigation.

Clinesmith was also previously reported to be having an intimate relationship with another member of the FBI team, Sally Moyer, though that is uncertain. [Tashina “Tash” Guahar was also a key legal figure on the Main Justice side of the MYE team.]

Ms. Moyer was responsible for the legal compliance within the FBI counterintelligence operations that generated FISA applications.

When the MYE investigation finished, the Carter Page FISA construction is where Kevin Clinesmith and Sally Moyer come together in their next assignment, the FBI investigation of Trump.

The interesting connection is that Clinesmith and Moyer both also reportedly worked for Michael Atkinson while he was an attorney with the Department of Justice (DOJ).

As we reported a few days ago, Atkinson next took a position as the ICIG. Recently, it was reported that Atkinson changed the IC whistleblower form sometime before September shortly after a CIA Agent, who was spying in the Trump White House, drafted a complaint on President Trump.

Atkinson saw to it that the whistleblower form was updated to allow for second hand information, which the ‘whistleblower’ (believed to be Eric Ciaramella) provided in his complaint. Although, the form should not have been accepted based on second-hand information and because it was about the President of the United States (who is not in the IC), Atkinson accepted the complaint.

wife of Michael Atkinson, the rogue ICIG who prompted Ukraine impeachment, was tagged in Iaakov Apelbaum’s opus on Nellie Ohr links, as an associate of Mary Jacoby (wife of Fusion Glenn Simpson)https://apelbaum.wordpress.com/tag/mary-jacoby-facebook/ … 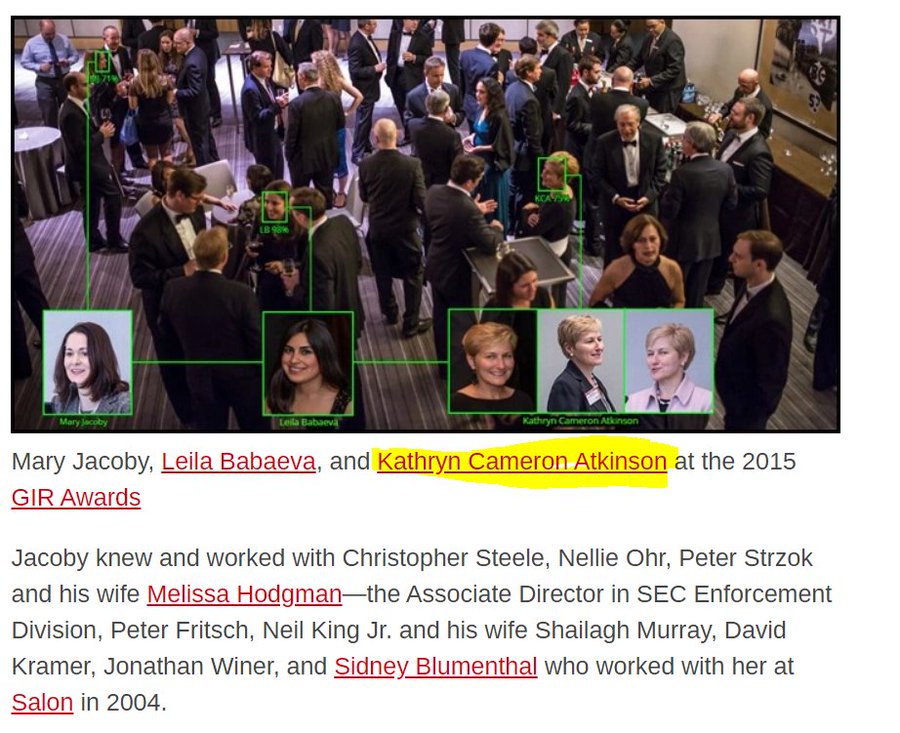 According to Apelbaum, ICIG Atkinson’s wife is connected to Fusion GPS, the firm behind the Steele dossier that was used by Obama’s DOJ and FBI to obtain a FISA warrant legitimizing spying on candidate and President Trump –

Jacoby [t[the wife of Fusion GPS’s Glenn Simpson]lso facilitated special recognition awards for ‘strategically’ placed attorneys such as Leila Babaeva, a Russian speaking attorney who is now working at the Foreign Corrupt Practices Act unit at the DOJ and Kathryn Cameron Atkinson, who just happens to be the wife of Michael  Atkinson, the next likely candidate for the position of the Inspector General of the Intelligence Community.

Apelbaum provides a couple pictures of Ms. Atkinson.  One is the announcement of the GIR awards –

Another picture shows Ms. Atkinson mingling with the crowd which happens to also show Ms. Jacoby –

Birds of a nasty feather flock together.  Who says there’s no Deep State?