Judge Orrick is an extremist.  He spent most of his career in a law firm that seeks the complete destruction of American history.  And if you destroy the history of the country you destroy the Country.  Jg. Orrick was a partner is a Law firm by the name of Coblentz, Patch, Duffy & Bass LLP where he spent 25 years and was recently affiliated with them immediately prior to him getting his judgeship.

Jeff Flake -REPUBLICAN voted in favor of his judgeship

The jury in the “Baby Body Parts” trial of activist and journalist David Daleiden has delivered a blow to undercover journalism, declaring that secret filming is now illegal and can leave journalists open to massive damages.

Peter Breen, a lawyer for Mr. Daleiden, said the judgement is a direct threat to undercover journalism in California and across the country.

Mr. Breen blamed Judge William Orrick’s directions to the jury for the verdict.

Judge Orrick told the jury in advance of their verdict that he has decided to find Daleiden guilty of trespass during his undercover journalism. Daleiden previously lost an attempt to have Judge Orrick removed from the case, alleging he was biased against the defendants. 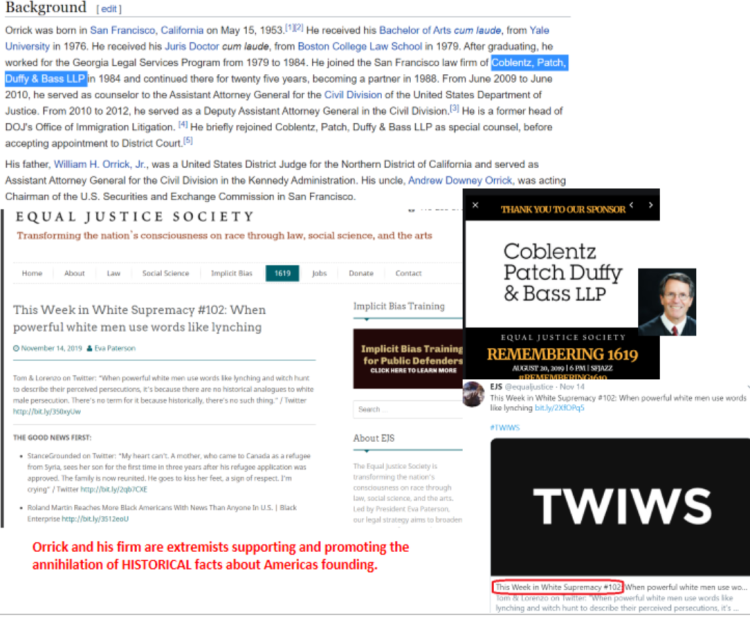 Planned Parenthood sued Daleiden and his colleagues after they released secretly recorded videos of Planned Parenthood executives haggling over the sale and price of baby body parts from abortions in their facilities. Planned Parenthood made a series of claims – stating they had caused damages because of their invasion of privacy with the undercover filming, fraud because they set up a false buying company, and RICO conspiracy because a number of people worked together in the project. RICO charges are more normally associated with criminal mafia cases. The jury found for Planned Parenthood in all their claims.

Planned Parenthood originally sought $20 million in damages against Daleiden and his colleagues. Daleiden recorded Planned Parenthood executives stating they changed abortion techniques to ensure better and more profitable body parts were retrieved for sale. His attorneys argue that the recordings took place in public places, such as restaurants and hotels, where participants have no reasonable expectation of privacy.

Planned Parenthood did not sue Daleiden for defamation or slander and the organization’s lawyers did not state that the videos were inaccurate or exaggerated. They instead claimed that they were filmed as a result of trespassing and other illegal methods. The organization is also claiming Daleiden and his colleagues are guilty of fraud for setting up a fake company and identifications to open business conversations with Planned Parenthood executives.

The defendants argued that they were involved in journalism and revealing criminal activity.

Phelim McAleer is a journalist and filmmaker. He is the author of the New York Times best-selling book “Gosnell – The Untold Story of America’s Most Prolific Serial Killer” and host of the podcast “The Ann and Phelim Scoop.”